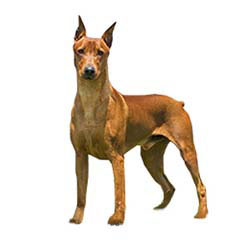 For centuries, Europeans have used dogs to help them around the house, the farm, and in their work, from herding and guarding to vermin-catching. Medium-sized terriers particularly excelled at ridding fields and grain stores of pests and guarding the property. One of the best was the Rattenfanger. These multi-purpose working dogs came in both wire-haired and smooth-haired versions. The wire-haired dogs eventually became the Standard Schnauzer, and the smooth-haired ones became the German Pinscher. In 1884, fans of this versatile and sturdy ratting guard dog wrote an official breed standard and started showing them in dog shows, but then, two world wars nearly obliterated the German Pinscher. Between 1949 and 1958, no records exist showing any registered Pinscher litters. Fortunately, one man named Werner Jung almost single-handedly resurrected the breed by searching for what appeared to be German Pinschers from farms all over Germany and combining what he found with four oversized Miniature Pinschers. The German Pinscher was back. The first German Pinschers came to America in the late 1970s but the AKC didn't recognize them until 2003. They remain much rarer today than the many breeds they helped to create, currently ranking 143rd in popularity.

An alert guardian with a penchant for pursuing small furry animals (including cats, but especially rodents), the German Pinscher tends to be wary of strangers and unwelcoming of strange dogs. He does not bark unnecessarily, but will sound any necessary alarm—his keen hearing and attentive guard-dog instincts mean he won't miss a thing. Despite the breed's placement in the Working group, he tends to be terrier-like in temperament, which means he's independent and with a mind of his own (translation: you'll need to be creative in your training efforts). This is a lively dog with a playful personality that demands to be with people and in the thick of things—and isn't above a bit of high-energy mischief.

The German Pinscher looks very much like a small version of the Doberman Pinscher, or a large version of the Miniature Pinscher. He has a square, muscular build, and high set ears carried erect if cropped. If uncropped, they can be either small and erect or V-shaped and folded. The German Pinscher carries his tail slightly above the horizontal; in America it is customarily docked between the 2nd and 3rd vertebra (ear cropping and tail docking are illegal in Germany). The coat is short and sleek, and comes in either black and tan, blue and tan, red, stag red, or fawn.

German Pinschers need early training to learn rules and boundaries. Otherwise, they'll be constantly pushing you to get their way. They respond best to a combination of reward-based methods coupled with a firm hand. Early socialization will help the German Pinscher be more accepting of friendly strangers, but won't reduce the dog's effectiveness as a guard dog. Crate training works well for housetraining and for keeping the German Pinscher safe when you can't supervise.

That sleek glossy coat is easy care—brush weekly or rub down with a hound mitt. Trim nails, brush teeth, and don't forget regular veterinary care. Otherwise, the main care issue pet owners need to prepare for is exercise. German Pinschers need a good deal of exercise, both physical and mental each day, to avoid becoming bored, frustrated, and a destructive nuisance. A few lively games in the yard or a good walk every day, along with a training session, should do the trick. Gifted escape artists, German Pinschers need a secure fence and plenty of monitoring when outside.

Essentially healthy with no major genetic issues, German Pinschers can occasionally develop hip dysplasia, cataracts, and von Willebrand's disease (a genetic bleeding disorder). Ask the breeder about these issues, and whether the parents of the litter have been tested for these problems.