Collar and Harness Options for Training Your Dog

Collar and Harness Options for Training Your Dog 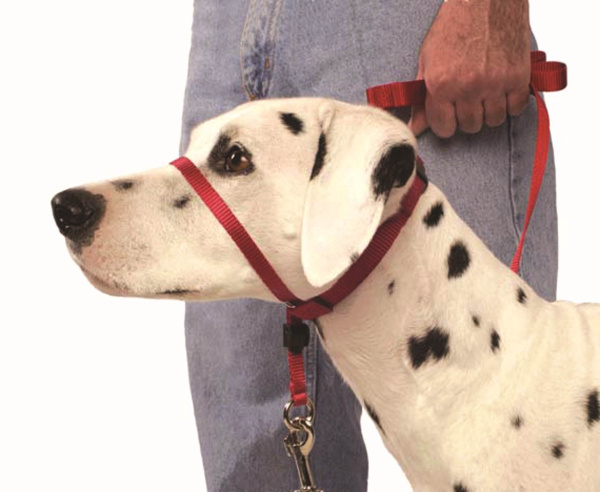 What is a good way to train my dog?

The goal of training is to teach the pet a response that is desirable and to associate a command word with that behavior. To be successful, you must first be able to get the pet to exhibit the desired behavior reliably before adding the command. To achieve this, the owner can use a lure such as a food or toy (lure-reward training) or a target training to encourage or lead the dog to the correct response. Alternately, training devices such as a head halter and leash can be used to prompt the dog into the response. The dog should then be rewarded. Although primary reinforcers such as food or a favored toy should be used initially to immediately mark the desired response, over time secondary reinforcers (e.g., lesser treats, praise) should replace these. Over time the training can then progress to gradually more complex or more accurate responses (shaping). Two of the most effective ways of immediately marking the desired response is the release associated with head halter training (negative reinforcement) or the use of a clicker as a positive reinforcer.

What about punishing the incorrect behavior?

Unfortunately, punishment is still being used inappropriately as a training method. When properly used, punishment is intended to decrease behaviors rather than training or encouraging what is desirable. Punishment can’t be used in training because it does not teach the dog what you want him to do – it only tells him to stop doing something. Punishment can also cause fear, anxiety, increased aggression and discomfort or harm to the pet. Some dogs may even retaliate or defend themselves by attacking the person who is administering the punishment. Therefore, it is not a logical, scientifically sound, or acceptable method of training and may in fact be counterproductive.

"Punishment cannot be used in training because it does
not teach or encourage the pet to exhibit what is desirable."


WWhat is perhaps confusing is that many dogs appear to have been successfully trained with punishment. While it’s true that many of these dogs have been trained to stop doing something, they have not been trained to exhibit behaviors that are desirable. Dogs that have been trained with punishment may be fearful of misbehaving in the trainer’s presence or with a particular training device (e.g., a prong collar). These behaviors may only be suppressed with a particular person (i.e., one man dog) or with a particular training device (e.g., prong collar) but the dog has not learned an appropriate behavior, and the underlying motivation to perform the behavior hasn’t changed. Some dogs that appear to have been trained with punishment have actually been trained with negative reinforcement where the discomfort is applied until the desired behavior is achieved and then immediately released when the correct response is displayed. This is a difficult concept to teach and requires the trainer to have perfect timing. In addition, these devices are uncomfortable and have the potential for abuse and undue pain. On the other hand, dogs trained with rewards and shaping should respond to the commands of any family member as long as the commands are consistent and positive.

What types of training devices are available?

There are a wide variety of leash, halter, and harness systems that can be used for walking and training. In fact, a control device attached to the head, neck or body is essential when leash control is mandatory (e.g., in communities with “leash laws”), as well as for those dogs that do not yet stay with the owners or come consistently on command.

Choke, pinch and prong collars have been designed to control and train in a manner that makes it increasingly uncomfortable if the dog does not obey. As the dog pulls forward, or the owner pulls backward on the leash, the collar tightens around the neck and may put pressure against the trachea. Therefore, the more the pet pulls, the greater the discomfort, but these devices can cause tracheal damage. In addition, recent studies have shown that these products may lead to an increase in intraocular pressure (pressure within the eyes), which would be dangerous to dogs that might be prone to glaucoma.


Choke collar training may be useful as a means of negative reinforcement.This can be accomplished by giving the appropriate command and pulling on the choke collar until the dog exhibits the desired response. The moment the dog obeys, the trainer immediately releases the tension. In other words, release from discomfort tells the dog that the desired response is now being exhibited.

Unfortunately, the use of negative reinforcement requires a lot of skill and knowledge, so choke, pinch, and prong collars are more often used to correct or punish undesirable behavior. Jerks, pops and increasing tension on these collars increase fear or anxiety which may make the dog increasingly more anxious, even if the discomfort isn’t enough to stop the behavior. With repeated exposure and training, the dog’s fear and anxiety may actually increase each time it is exposed to the stimulus (because previous exposures have been uncomfortable or aversive). Some dogs may become so used to the effects of the choke or pinch device that it becomes ineffective. Although many trainers still train with devices that are intended to pull, jerk, choke, punish or “correct,” the most effective and humane means of training is through motivation, positive reinforcement, and shaping.

Body harnesses or head halter restraint are two alternatives to neck collars. Some body harnesses merely serve as restraint devices while others such as the Gentle Leader®, Easy Walk™, or the Halti™ Sensation or Sensible body harnesses have all been designed to stop pulling since the leash attaches at the center of the dog’s chest and can be used to pull the dog in the direction you want him to go. Previously, products such as the Lupi™ and Sporn harnesses were used to stop pulling. They attached above the dog’s back and encircled the front legs, but these caused discomfort or pulled the forelegs backward to stop pulling and are therefore more uncomfortable and less effective at calming and controlling the dog. Products that control the head can also be used to stop pulling and change the dog’s direction as well as to close the mouth and train the dog to focus on the owners.

Are there different types of head halters?

Broadly speaking there are two types of head halters. By far the most common are ones that act like a horse’s head collar with the lead attached under the chin. These work on the principle that wherever the head goes the body will follow. There are also head halters where the leash attaches behind the head such as the Canny Collar™ or the New Trix Easy Way™. Although these may work well to control pulling, they may not provide sufficient mouth and muzzle control for improving undesirable behavior. The Gentle Leader® has both a neck and nose strap adjustment, so that it can be used either to control the dog when the owner is holding the leash, or with a leash or “drag” line left attached and dangling, for immediate “remote” control. Therefore it might also be referred to as a head collar. Similarly the Snoot Loop™ might be fitted to remain on the dog with a leash attached, since it has side adjustments to allow for a snugger muzzle fit. The Halti™ is a head halter that is an effective leash control device, but might be pulled off if the dog is not properly supervised since it does not have an adjustable nose strap. 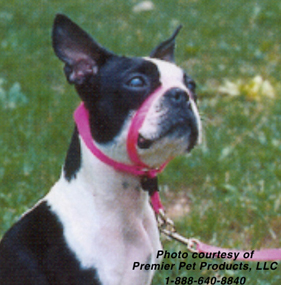 How might I use a head collar/head halter for control?

One of the most effective means of gaining control and ensuring that your dog responds quickly to each command is to use a leash and head halter such as the Gentle Leader® for training. With the Gentle Leader®, the owner gains control through pressure exerted behind the neck and around the muzzle. The head halter acts as a tool to help achieve the desired response without punishment and to communicate the owner’s intentions. With a gentle pull in the right direction the dog can be prompted to exhibit the desired response, which can then be immediately reinforced. Even animals as large as horses are commonly managed with devices that control the head and muzzle, since “where the nose goes the body follows.”

"In one study, puppies that wore head halters were
less likely to be relinquished as adults for undesirable behavior."

With a head halter, the owner can gain eye contact and reorient the dog to perform the desirable response with a minimum of physical effort (think of it as “power steering”). With the head halter properly fitted and the leash slack, the dog is not restricted from panting, eating, drinking, chewing, barking, jumping up, biting, lunging forward, or stealing from the table or the garbage. On the other hand, with a leash attached, the head halter can be used to prevent or immediately curtail problems such as food stealing, garbage raiding, jumping up, house soiling, barking, and chewing. Outdoor problems such as digging or stool eating can be prevented or interrupted by leaving a head halter attached to a longer outdoor line. The head halter and remote leash can also be used to prompt the dog to respond to a command (e.g., “come,” “sit,” “watch” or “focus,” “quiet” for barking). A release indicates to the dog that it is performing the desired behavior. Although head halters may be used as a training aid for all dogs, they are particularly useful for dogs that are not immediately responsive to commands, and for most behavior problems including fears, phobias and aggression. They are also useful in dogs of any age, including puppies that are excitable, unruly or difficult to train, and those that exhibit undesirable oral behaviors including chewing and play biting. In one study, puppies that wore head halters were less likely to be relinquished as adults for undesirable behavior.

How does the head halter work?

Pets tend to oppose or pull against pressure. Dogs that walk or lunge ahead of their owners are therefore more likely to pull even harder if the owner pulls back on the leash. Therefore, with a head halter, when the owner pulls upward and forward the dog is likely to move backward into a sit. In addition, the mouth will be closed, and the dog’s attention can be refocused on the owner and away from the target of its distraction or misbehavior. A continuous pull rather than a tug or jerk should be used until the desired behavior is achieved. The second hand can also be used to gently guide the head into position. Immediately releasing tension then indicates to the dog that he is now responding acceptably. Dogs can also be directed away from the stimulus toward which they might be fearful or aggressive with a pull on the head halter. This not only turns the dog’s head toward the owners but also closes the mouth if enough tension is applied.