My veterinarian said my dog has burr tongue. What is it, and how did my dog get it? 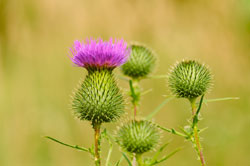 Burr tongue is the common name for burdock tongue (also called granular stomatitis or granulomatous glossitis) caused by ingestion of the burrs from the burdock plant (Arctium lappa L.), a form of thistle. Burdock plants typically bloom in July and August and during these months produce the greatest number of burrs. Burdocks have a prickly head that easily catches on fur or clothing and was the inspiration for Velcro or hook-and-loop fasteners.

Burr tongue is most common in the summer months when Burdock plants are blooming.

Burr tongue is most commonly seen in long-haired dogs when they accidentally traumatize their tongue and mouth on the burrs during grooming. The hooked scales of the burrs become embedded in the tongue and gums and cause an intense foreign body reaction.

Affected dogs often have small red bumps on the tip and edges of their tongue, front of the lips and gums, and occasionally the base of the nose. These bumps may eventually spread and blend together to form larger lesions. In addition, dogs with burr tongue typically have bleeding from the mouth, drooling, trouble keeping food in the mouth while eating, difficulty drinking water, decreased appetite, and pain. These problems can result in behavioural changes, including aggression when an owner tries to look inside the mouth. Some dogs will also have bad breath.

If your dog has been in contact with burdock or burrs or has been in the woods before developing these symptoms, burr tongue should be considered.

Burr Tongue varies in severity and treatment therefore can vary from doing nothing to performing surgery. Always have your veterinarian assess the condition as soon as possible after you see symptoms.

How is burr tongue treated?

Based on the severity of the condition, treatment ranges from letting the injuries heal on their own to administering antibiotics and pain medications to surgical intervention. If there are only a few lesions, medical therapy alone until the body expels the plant material may be all that is required. In more extensive or painful cases, your veterinarian may recommend surgical removal of damaged tissue followed by anti-inflammatory and antibiotic therapy. Most dogs return to normal within two to three weeks after treatment. Some dogs will require follow-up treatment if small plant fragments remain in the mouth.

How can I prevent burr tongue in my dog?

To avoid burr tongue, carefully monitor your dog's coat for any embedded burrs, and remove them at once. If you live in an area that contains many burdocks, brushing and combing your dog after each walk is advised.

A Side Note about Burdock Seeds and Velcro

Legend has it that the Swiss inventor of Velcro, George de Mestral, investigated the burrs he and his dog carried home with them after a hike in the woods. He discovered that the burdock seeds used a hook-and-loop system to attach to passing animals, promoting seed dispersal. de Mestral realized this mechanism had other applications, and so Velcro was created.