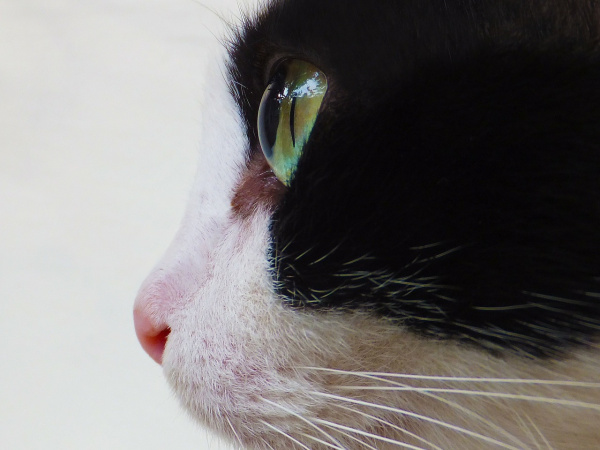 There is no delicate way to ask, “Why do cats sniff butts?”  Apparently, this particular issue is as sensitive as a cat’s sense of smell, so let’s approach the question carefully. To address why cats sniff rear ends, we have to understand their sense of smell and their communication techniques.

Cats Have an Amazing Olfactory System

Like humans, cats have five basic neurological senses: taste, touch, hearing, sight, and smell. Of these senses, smell takes the lead in the feline world. The feline sense of smell is far more advanced than ours. When compared to humans, cats have a smelling ability that is 14 times more sensitive. The human nose contains about 5 million olfactory receptors that detect aromas, while the feline nose has 45 to 80 million receptors.

"Cats also have an additional tool
to enhance their sense of smell."

Cats also have an additional tool to enhance their sense of smell. Felines have a special organ called Jacobsen’s organ (or the vomeronasal organ) that is located inside the nasal cavity and opens into the roof of the mouth, right behind the upper incisors. This amazing organ serves as a secondary olfactory system and detects specific chemicals by utilizing nerves that lead directly to the brain. Unlike olfactory cells in the nose, the odor receptors of Jacobsen’s organ do not respond to just ordinary smells. Jacobsen’s receptors pick up chemical substances that have no odor at all. In other words, they work to detect “undetectable” odors.

Jacobsen’s organ communicates with the part of the brain that deals with mating, and its primary function relates to breeding. By identifying pheromones, Jacobsen’s organ provides male and female cats with the information they need to determine if a member of the opposite sex is available. In addition, this organ enhances the sense of smell that newborn kittens need to find their mother’s milk source. Kittens can identify their mother from other nursing dams via their sense of smell. If a kitten is placed between two nursing mothers, he will migrate to the one that gave birth to him!

The two separate parts of the cat’s odor detection system, the nose and Jacobsen’s organ, work together to provide delicate sensibilities that neither system could achieve alone. When a cat curls his lips and appears to smile, he opens up Jacobsen’s organ, increases the exposure of his nasal cavity to aromatic molecules and essentially becomes a remarkably efficient smelling machine.

Cats Use Smell to Communicate

When two people meet, they evaluate each other’s body language, facial expressions, and tone of speech to quickly assess their relationship. They may shake hands or hug each other, share a casual verbal greeting or overflow with tears of joy, or they may totally ignore each other.

Cats may not verbalize, shake hands, or hug like humans, but they do assess each other. When two cats meet they usually sniff the head area first or may even share a gentle head bump. This physical greeting releases pheromones from glands in the face. These pheromones tell a lot about a cat, so the feline sense of smell serves as a form of chemical communication tool.

Amines and acids are the primary compounds emitted by cats that provide the dialogue for chemical communication. The aromas produced can tell one cat what his new-found friend likes to eat and what sort of mood he is in. By simply smelling a feline companion, a cat can determine whether they are male or female, happy or aggressive, healthy or ill. Cats can get a general idea about each other with a quick sniff of the head, but more detailed information can be determined by getting up close and personal. Hence, cats sniff butts.

"When cats sniff butts as a greeting,
they can determine a great deal of
information about each other."

When cats sniff butts as a greeting, they can determine a great deal of information about each other. Is a new feline acquaintance friend or foe? Is she going to be a good “date”? Is he aggressive? Is she feeling ill? And because the odor is unique to every cat and serves as a form of feline identification, two cats can quickly determine if they’ve met before.

The very act of sniffing rear ends can establish dominance and set the tone of the relationship. The dominant cat will usually initiate the sniffing, while the more submissive cat waits his turn. A submissive cat may end the sniffing and retreat. A dominant cat may stop sniffing and hiss to end the introduction. Some cats are shy and like to limit the information they give out, so they will simply sit down and clamp their tails over their rectums, reducing the odor they emit.

Even though sniffing butts may seem unthinkable to humans, think of it as a healthy, socially acceptable form of feline communication. The upside is that this form of communication is a lot quicker than a lengthy introduction!